My first extensive piece done on Procreate + iPad Pro 1. The device is such a pleasure to use and draw on. I don't think I had this fun drawing something in a long while since I last kept a sketchbook.

I've long shied away from using a drawing tablet with built-in screen since my experience with Wacom cintiq 22hd back in 2008 or so. The thing was a pretty shitty product overall and that soured my experience with it. Fast forward nearly 10 years I think the tech has finally caught up it became much more reasonable now.

I actually bought my iPad Pro few months back. It just took me a while to really settle down from all that family stuff going on and get to sit down and chill. Now that I think of it I could have waited and got myself an iPad Pro 2 with truemotion or whatever they call that 120hz but... oh well. iPad Pro 1 is still pretty marvelous. Not to mention the software itself, Procreate, which is great to use as well.

However some of my gripes is that:

- iPad does get pretty warm after an extensive use, making your hand sweaty.

- You have to wipe the screen once a while or you'll see smudges.

- Procreate can be buggy sometimes. (notice the frame skip in my latest video)

- Apple Pencil pressure sensitivity can be rather inconsistent (especially under Procreate).

Other than those issues the product is superb and I've been having a blast (As you can see from my wonderous *cough* music creations and whatnot). The drawing process is so much more personal and streamlined I prefer it to drawing on my windows computer with Wacom tablet.

Although it does get pretty clunky when it comes to coloring and painting... Unless there's much quicker, and easier color picking method I don't see myself using Procreate to paint. Well, not easily that is.

Also my favorite aspect of using Procreate is the automated recording. I've long found myself drawing quite badly when there's a pressure of recording on PC. It's the fact that once I start recording I gotta all ready up and never make a mistake. With Procreate I can just surf around, chill and draw and the software will automatically keep a recording of all the strokes I made, minus the downtime in between. It's pretty neat and You're seeing the function demonstrated in my latest timelapse video.

And the manual recordings using shadowplay + avermedia can bloat in file size after a while. 12 minute 4k video made from using Procreate came down to about 300 megs before editing on Resolve. The final version you see on Youtube was about 1 gig. Remember that cop girl that I still haven't finished? That was about 300 gigs before I compressed them down to 50 gigs. Yeesh.

Anyways I might try to color on Procreate and see how that goes. Either ways drawing on PC and wacom tablet no longer brings me joy. I'm going to see how far I can take my iPad in terms of professional works. 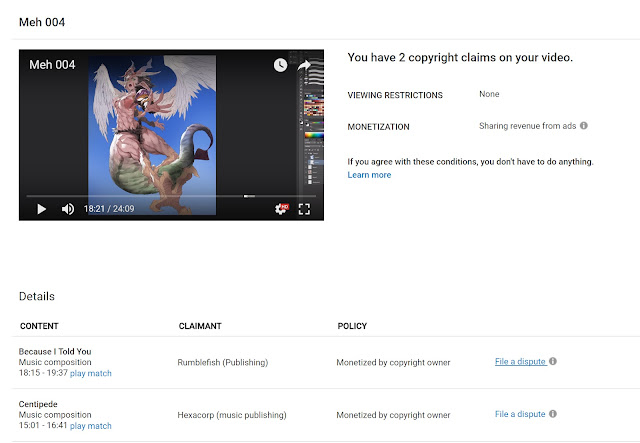 Fucking seriously? After all that trouble I went through to make the fucking music this is how it goes? Am I supposed to play my own fucking instruments now too?


Will keep you updated on this shit.

So the story is that at one point in Youtube's history they had licence free music service on their video settings which allowed you to overlay music to your video with Google provided application. I foolishly took their word and used what they provided me, a supposedly free music that isn't held back by some copyright laws or shits of sort.

And Google one day ended the program, and what was once in their 'free' library got loose and started flagging people's videos. It was already late by then. The video was hard encoded with the said music and it couldn't be reversed. Of those videos the lucky few had their audio scrubbed permanently but even those got flagged for some reason, to my great frustration.

Google once again provides those 'free' music on their creator platform but the damage is done. I decided that what I didn't create can not be trusted.

So today I made a music of my own to play to videos I create.

Starting the learning process was rather steep. This finished piece is after about 8 different attempts with the tune going basically nowhere. But this morning something clicked and I was able to breeze through it in like 4 hours.

The music is by design intentionally 'dull' or 'nondescript' since it will be repeated to death in a 4~5 hour Timelapse video. However, hopefully the lightening will strike multiple times so I can expand my music library down the line.